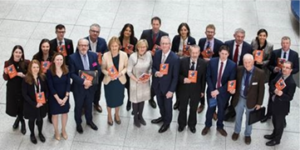 Annually,  County Kildare Chamber with the Chamber network in Ireland participate in a 2 day visit to Brussels and partake in meetings in the European Commission, in the European Parliament and with the Irish Permanent Representation in Brussels.

These high level meetings give attendees an excellent insight into the activities in Brussels in regards to legislation, EU directives and EU engagement with member states.

Biennially we participate in  The European Parliament of Enterprises™ (EPE) which is the largest event at EU level giving the floor directly to entrepreneurs.

It is organised once every two years by EUROCHAMBRES in collaboration with the European Parliament. The first edition was launched on 14 October 2008 on the occasion of EUROCHAMBRES’ 50th anniversary.

The concept of the European Parliament of Enterprises™ originated from the consideration that there is a democratic gap between the European institutions and the main actors of economic growth, entrepreneurs and that, consequently, European legislators do not sufficiently take into account entrepreneurs’ concerns.

On the other hand, businesses are largely unfamiliar with the role and functioning of the European Union and the significance that the institutions’ decisions can have on their activities and results.

The EPE recreates a parliamentary session and gives the floor to European entrepreneurs. This highlights the “economic democracy” of the Chambers of Commerce and Industry through their representation and their structure.

The EPE is an excellent opportunity for businesses to engage with key policy makers at EU Level.