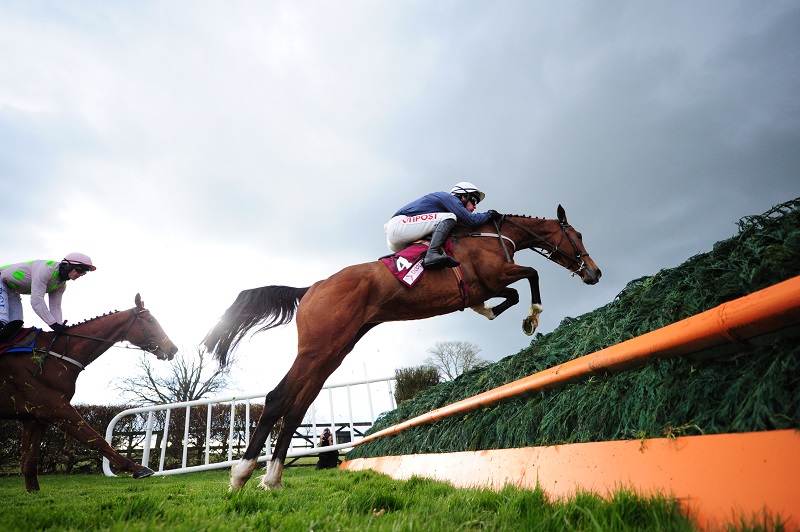 Naas based Dooley Insurance Group continued its sponsorship at the Punchestown Festival today (27th of April) by sponsoring the Grade 1 Dooley Insurance Group Champion Novice Chase.  The €100,000 race is one of the highlights of the festival and it did not disappoint. Despite the anticipated battle between Monkfish and Envoi Allen taking place it was in fact the mare, Colreevy who led the charge from the off and the ensuing contest led to Colreevy winning with Monkfish taking second place.  The Willie Mullins trained Colreevy was the charge of jockey, Danny Mullins who rode her to victory in the colours of Mrs. N. Flynn. The 7/1 winner showed great class and bravery and together with Monkfish were the only two horses to finish the race.

“She’s a tough mare. She was sticky early on but got into a nice rhythm and ran out a nice winner of a hot race, said Danny. “I said to Willie beforehand that I wanted to bounce out and flow and he said, ‘Yeah, just keep jumping and travelling away.’ And once she warmed into it, she was very good.”

“I thought going down the back straight they were on my tail. I got a nice jump at the third last and once I was able to get up around the bend still with a little bit of petrol, I was happy enough it would take a fair one to beat me. But that said, I had Monkfish and Envoi Allen behind me. They were going to be coming at me. “Fair play to her. That’s my second Grade 1 on her this year. Cheltenham Festival winner. She’s a proper mare.”

The winner, who was recently covered by leading sire Walk in the Park, is now set to retire at the age of eight.

Tim Dooley, Managing Director of the Dooley Insurance Group said, “We are delighted to sponsor racing during the Punchestown Festival, it has allowed us to communicate our brand to a huge audience at home and abroad. We are embracing our local track and see our involvement with Punchestown as a partnership which has grown and strengthened since we first got involved in 2017. During the term of our sponsorship our race, The Dooley Insurance Group Novice Chase has grown in importance and stature and is Grade 1 status since 2019. The calibre of racing and the strength of the field today is testament to the great work of all the team at Punchestown and the standard of the track.  Huge congratulations to the winning connections of Colreevy.”