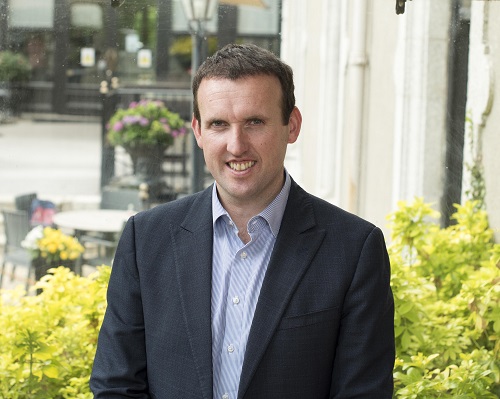 FBD Hotels & Resorts has announced that Ger Alley has been appointed General Manager of the four-star Killashee Hotel outside in Naas, Co Kildare. The hotel joined the FBD Hotel & Resorts family in April of this year and one of Ger’s first tasks is to oversee the first of phase of the €3 million refurbishment plan that is currently underway.

Having graduated from Galway-Mayo Institute of Technology in 2007 with a BA in International Business & Hotel Management, Ger started his career as the Duty Manager at what was then Killashee House Hotel. It is serendipitous that he returns 15 years later to take on the role of General Manager.

Ger who is from Laois and whose family has owned the popular Copper Kettle restaurant in Durrow for many years, was awarded General Manager of the Year at The Hotel Awards 2019. He joined FBD Hotels & Resorts as General Manager of The Heritage Hotel & Spa Killenard, Co Laois in January 2019 and oversaw an extensive refurbishment programme at the hotel. Previous to this Ger was Director of Food and Beverage at The K Club in Kildare.

Commenting on his appointment Ger says, “Killashee holds a special significance to me as it is where my career in hotel management began. It is a privilege to return as General Manager and to be part of this exciting new chapter. This first phase of the refurbishment is well underway with €3 million being invested is in the upgrading of all the bedrooms, Bistro Restaurant, Terrace Restaurant, Gallery Lounge and Reception. There is also some grounds and other internal works being done and the completion date is end of September.  The experienced team at Killashee is working to ensure the transition from old to new is seamless, with the minimum of disruption to our clientele while maintaining the highest quality standards in hospitality. The team are energized and looking forward to the next chapter of Killashee.”

The four-star Killashee Hotel is well established as a leisure, corporate and wedding destination. Set on 55 acres of historic parkland, beautiful gardens and walkways, the 141 bedroom hotel has an award-winning spa and leisure centre with swimming pool and hydrotherapy suite.

Killashee Hotel officially joined the FBD Hotels & Resorts family on 1st April 2022, becoming the sixth hotel in the company’s portfolio of luxury four-star superior hotels and resorts. Killashee joins The Heritage in Laois, Castleknock Hotel in Dublin, Faithlegg in Waterford, La Cala and Sunset Beach Club on the Costa del Sol in Spain, as part of one of Ireland’s leading hotel groups.