Solicitor Liam Moloney was recently appointed to the Executive Board of the Pan European Organisation of Personal Injury lawyers (PEOPIL) www.peopil.com as its new Revitalisation Officer.

PEOPIL is a not- for- profit organisation that has members in over 44 European Jurisdictions and also in the USA, Canada, Panama, Mexico and South Africa. It has over 450 members and its primary aims are to advocate for fair compensation for accident and medical negligence victims and to ensure access to justice. 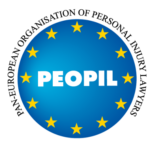 From his Naas legal practice Mr Moloney represents people injured in accidents abroad. He has secured compensation for hundreds of tourists injured in road, hotel, cruise ship and airplane accidents and is an expert on international travel law. He has been the Irish Board Member of PEOPIL since 2013 and also currently represents Ireland and the UK on the Board of the American Association for Justice www.justice.org.

Commenting on his election Mr Moloney said today “I am honoured to have been elected to the PEOPIL Executive Board. PEOPIL is a vibrant legal representative organisation that lobbies European Institutions and National Governments for victim’s rights. With many challenges in the area of tort reform, it is important that the rights of accident victims to recover fair and proper compensation is protected”.

Liam will serve on the Executive Board for a 3-year term and his new role will involve him working with his Board colleagues primarily on PEOPIL’s marketing, membership recruitment and retention, case referrals and international development strategies.